Quite a remarkable photo charter on 26th March: The 0-6-0 ex-London Transport Pannier Tank L.92, ex-GWR 5786, was in charge of a matching goods train at the Severn Valley Railway. Although this line has nothing to do with the London Transport system, it was a rare chance to see such a train with this formation. The charter was well organised and the weather co-operated too.

The Great Western Railway made much use of its pannier tank designs for shunting, light freight and passenger work. By far the most numerous type was the 57xx class, of which 5786 (built in 1930) is an example.
Eventually they numbered 863 and could be found all over the GWR system. They were introduced in 1929 and construction continued until 1949. Slightly smaller versions appeared as the 54xx, 64xx and 74xx classes used for branch passenger and freight trains. The 16xx were the last in the long line of pannier tanks.

Examples of all these panniers soldiered on almost until the end of steam and many are preserved at various sites around the country. 5786 lasted longer than most as it was one of several sold in 1958 to London Transport and worked engineers trains around the LT system until steam ended at Neasden shed on the Metropolitan Line in 1971.
Numbered L.92, she was painted in London Transport's attractive lined maroon livery. The loco was bought straight from LT service by the Worcester Locomotive Society and spent many years at the Bulmers Railway Centre at Hereford before that site closed and the Society moved its base to the South Devon Railway. 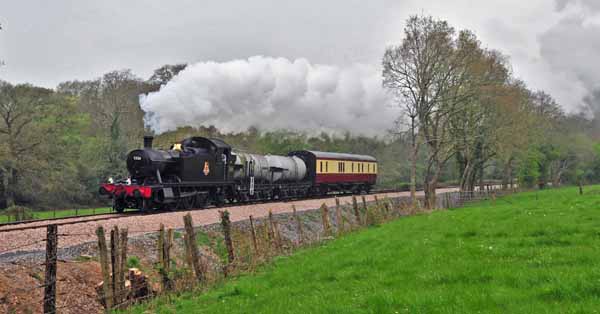