“Terrier” 32678 was left dirty for a photo charter with two BR green Mk1 coaches on 26th October on the Kent & East Sussex Railway (K&ESR).
The K&ESR has two of the ten still surviving members of this class of 50 small six coupled tank locomotives built by the London Brighton and South Coast Railway between 1872 and 1880. They were known to generations of the general public as ‘Terriers', probably because of their reputation for outstanding work on the South London line and in the tunnels of the East London line. They had a capacity for hard work far in excess of their diminutive size. Designed by the Brighton Company's Locomotive Engineer, William Stroudley, they were introduced as class A (later A1). Between 1911 and 1947 nearly half the class was rebuilt with improved boilers and longer smokeboxes and were redesignated as class A1X.
BR 32678 (ex-LB&SCR No. 78, 678; SR No. 2678, W14, W4) emerged from Brighton Works in July 1880 as part of the last batch of A1 class locomotives. 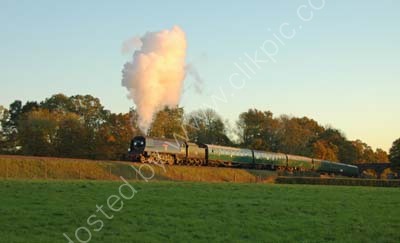